Welcome to 4 metres, the friendly band.

I’m now active on the 4 metre 70MHz amateur band, monitoring 70.450MHz. It’s been twelve years since I was last on the band so I’m really looking forward to it. I have an Anytone FM radio, thanks to my old mate, Nick, a local radio amateur. My aerial is  Sirio CX 4-68 vertical fed with RG8X coax. My QTH is Worthing, on the Sussex coast. Give me a call!

There are now thirty-three of us in the Worthing and surrounding area regularly lurking or chatting on four metres. Our regular net is at 7-30pm local time every Friday on 70.400MHz. Please call in, if you can hear us. We have an afternoon net at 2pm local time on 70.450MHz. Also, we try to monitor the FM calling frequency 70.450MHz as often as we can so give us a call.

We often chat on the calling channel as there is more chance of us being joined by anyone monitoring the channel. However, we will gladly QSY if asked.

The aerial has arrived. As you can see from the photos, I’m sealing the joints where the ingress of water might cause problems. The aerial is extremely well constructed but, as with even the most expensive aerials, it’s best to seal the joints as a safeguard.  I’ve used Araldite around the base of the rubber skirt surrounding the S0239 socket. Once the PL259 plug in screwed in, I’ll cover the whole thing with self-amalgamating tape. I’ve used silicone sealer where the base of the aerial meets the mounting bracket. I’ve used self-amalgamating tape where the aluminium rod meets the brass section but I’ve left the drainage hole open, see photo. Sealing this joint will keep water away from the joint and help prevent electrolysis occurring. 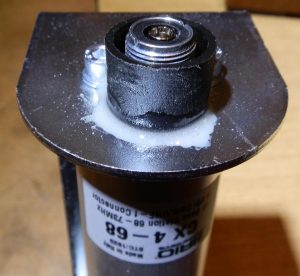 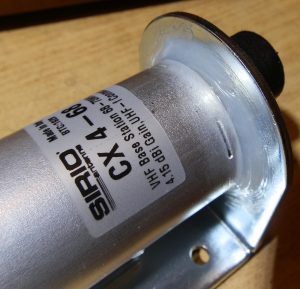 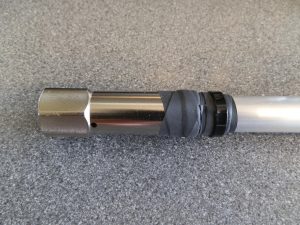 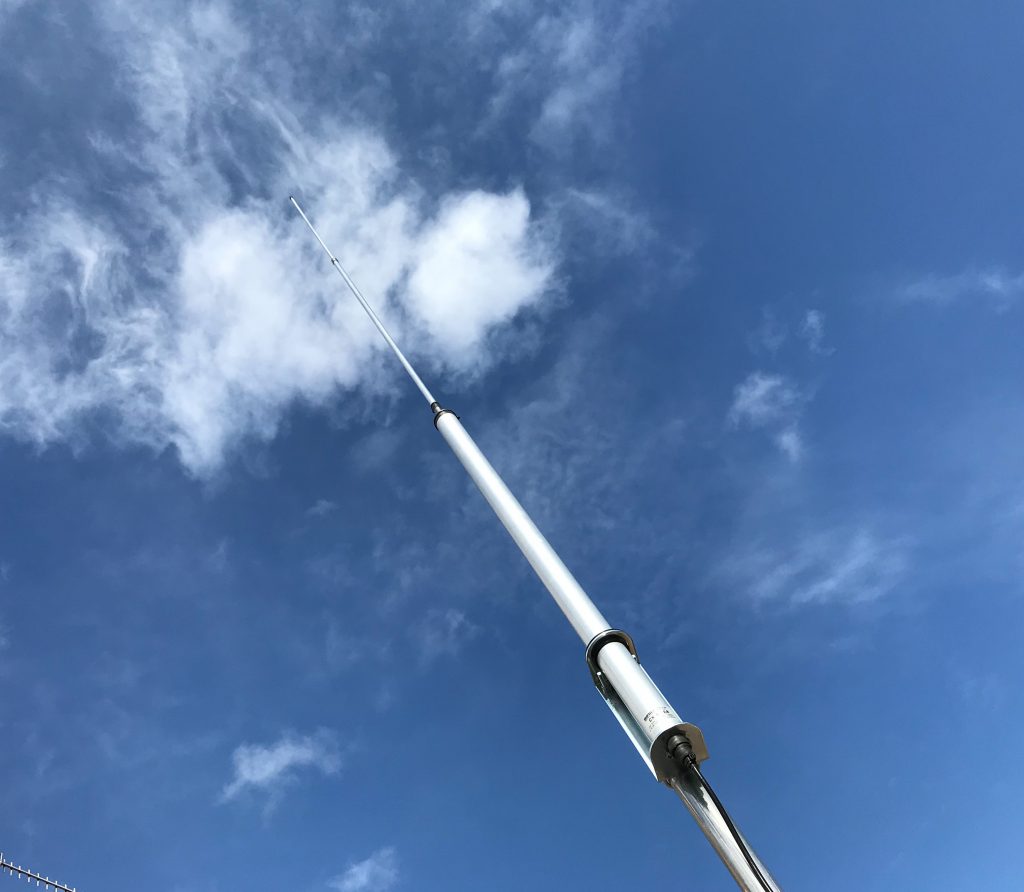 I’m not obsessed with SWR but, 1.5:1 was too high for my liking. After repeated adjustment of the telescoping top section of the aerial, and some bad language, I’ve finally achieved an SWR of 1.2:1 in the centre of the band. It was raining so I got wet in the process. But it was worth the effort.

The base of the aerial is only 8 feet above the ground but it’s working well. At some stage, when the weather improves, I’ll get the aerial higher up.

Worked some real  DX today… all the way to Mark in Pagham. That’s 16 miles as the RF flies! The base of the aerial is now at 12 feet above ground, which has improved things greatly. Height  is very important at these frequencies. Raising the aerial by a mere 4 feet has brought received signals up out of the

I’ve now added the coax RF choke, 4 turns about 4 inches diameter, which should stop the coax radiating. The  SWR is 1:1.1 so I’m happy with that. The base of the aerial is still only 12 feet above the ground. I’m planning on increasing the height soon. 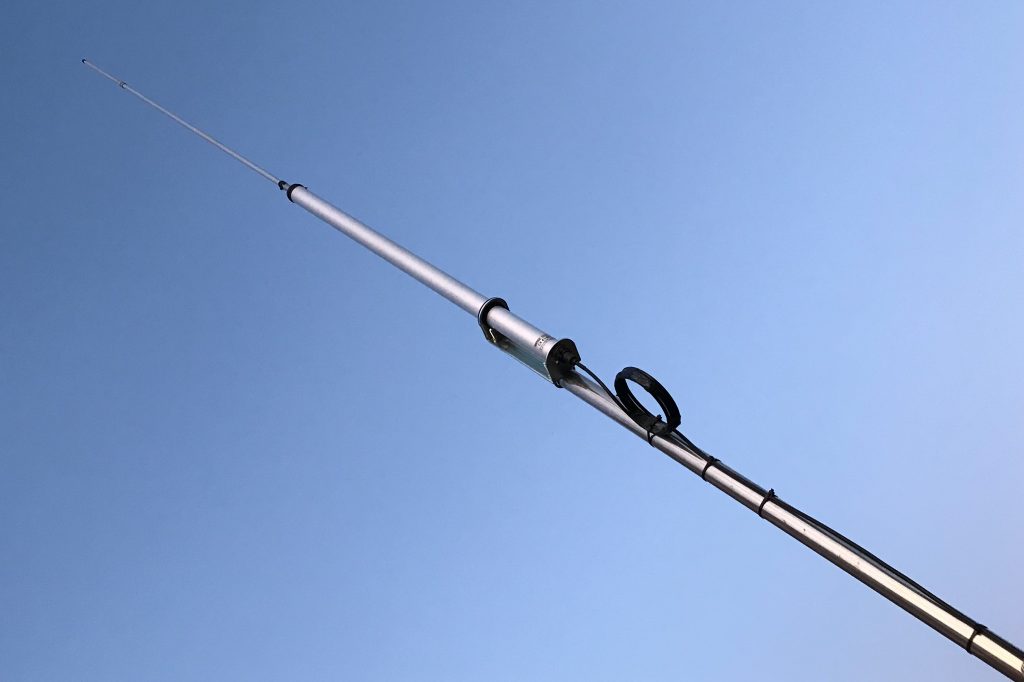 You might have experienced an FM station on your car radio fading as you stop in a traffic queue. Drive forward a few feet, and the station becomes very strong once again. Moving your 4 metre aerial upwards to gain height is obviously a good idea. But, at these frequencies, it might be an idea to move the aerial well away from buildings and other large objects. A few feet can make all the difference.

Most types of skywave propagation use the Earth’s ionosphere to refract or bend radio signals back to the Earth’s surface. With sporadic E propagation, the signals are reflected by small clouds of  ionized gas in the E layer. This can allow long distance communication at VHF frequencies.

A mobile station and I carried out some tests.  The mobile drove north and the only time I lost him, momentarily, was when he was behind a 463 foot chalk hill, shown on the contour map. It was an interesting experiment with excellent signals most of the time. The distance between us was three to four miles. The results surprised us both and we agreed that 2 metres and 70cms wouldn’t have been anywhere near as good. 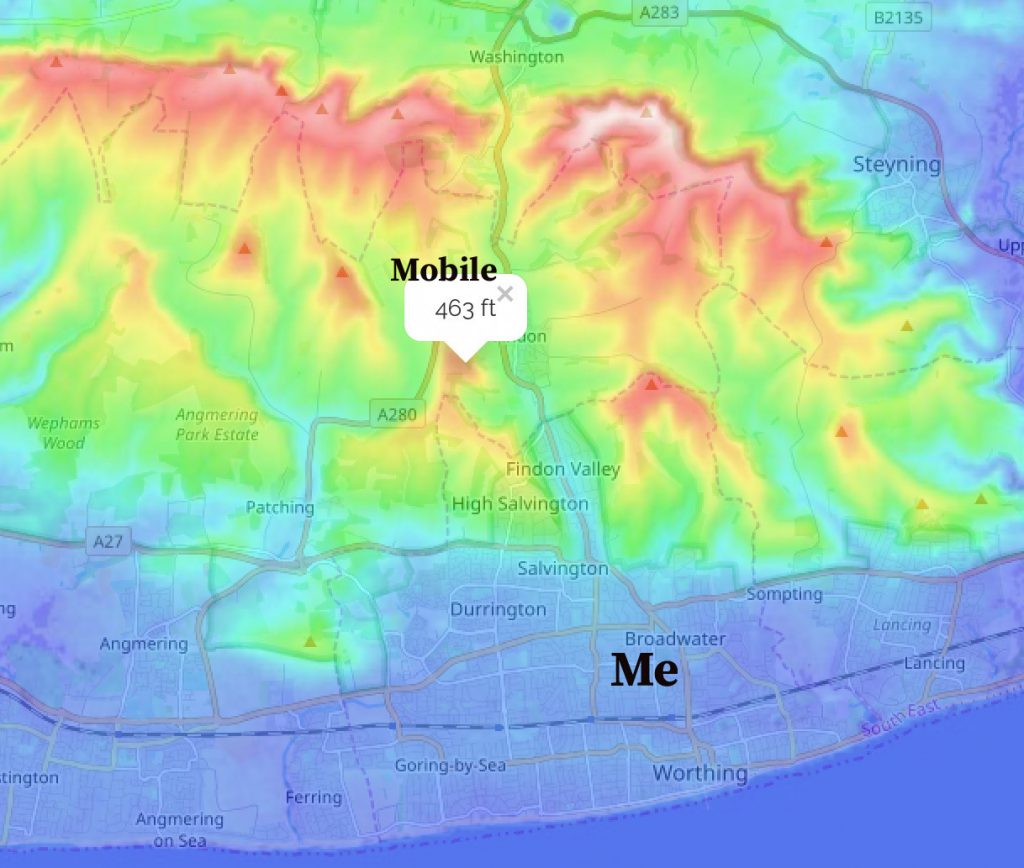 This, hopefully, is the final position for the aerial. I’m not moving it again! The base of the aerial is now 18 feet above the ground and well clear of the house, see photo on the right. Reports so far are favourable and received signals are much stronger. The aerial is mounted on a 1 1/2 inch pole which is atop a 2 inch pole. The mast will need a guy rope half way up on the west side to keep the aerial stable during westerly winds. The photo on the left shows the professional mounting assembly… the pole tied to the rabbit run. And there are the rabbits! Click on the photos for a larger image. 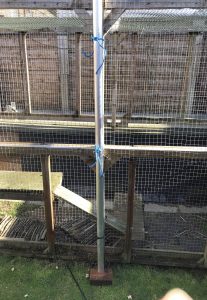 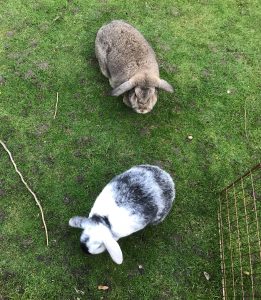 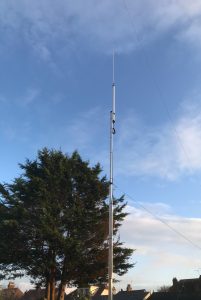 The winter is coming…

What better way to spend a winter evening other than monitoring 4 metres by a coal fire with a real ale? Plus, listening to Atmosphere Radio on the internet. 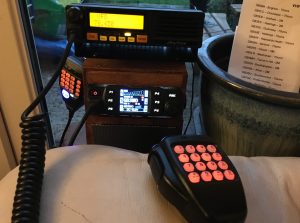 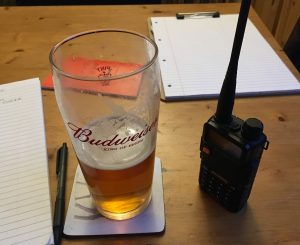 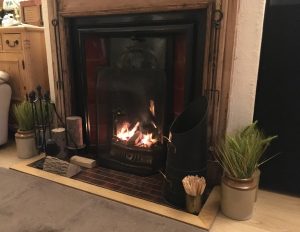 The 4 metre amateur band is now busier than our local 70cms repeater in Worthing, West Sussex. This afternoon, there were several stations on the band… seven, if my memory serves me correctly. We were checking out aerials, discussing 70MHz radio equipment, including PMR gear manufactured by Tait Radio, and generally keeping the band alive. Use it or lose it? We’re doing our best to use it in sunny Worthing!

But, there’s more… one of our group has been mobile on 4 metres. Hopefully, we’ll have two or three mobile stations on the band before long. It’s an interesting band, not least as far as propagation is concerned. Aircraft flutter is a regular occurrence as we are all fairly close to Shoreham Airport. QSB on mobile as well as base stations is often very slow. Also, unlike the higher frequency VHF and UHF bands, there are nulls and black spots between some stations on 70MHz.

I took the aerial down again, even though I said I wouldn’t. Having raised it to 18 feet, and moving it a little further away from the house, I noticed that the SWR was approaching 2:1. Not good! Also, I needed to finalise the waterproofing… silicone sealer, self-amalgamating tape, spray varnish etc. The varnish isn’t really necessary but it helps to keep moisture out if sprayed over the taped joints and over the tape covering the Pl259 plug. The aerial is now performing better that ever.

We’re going mobile! Several of us have ordered Tait 2010 PMR radios for mobile use. They have 4 channels and run 25 Watts. With a quarter wave whip aerial on my car, I’m looking forward to heading up to the top of the South Downs and working some DX. Well, possibly some contacts a few miles away.

Firstly, get a decent SWR meter. Most of the CB types won’t work at VHF. Yes, the meter will register. But you will have false readings at 70mHz and above. I use the Zetagi 203W.

A word of warning: moving the Sirio aerial up or down, or in any direction, can affect the SWR considerably. This isn’t necessarily a bad thing but, to repeatedly take the aerial down to adjust the top section is time consuming and very frustrating. However, it’s worth it. Get it right and, once it’s installed, it should serve you well for many years. This also applies to the waterproofing process. Spending a few hours now will save a lot of misery later.

My Tait T2010 radio has arrived! Four channels, 25 Watts. I believe there are now seven of us using Tait low band VHF radios on 4 metres. I hope to be mobile very soon, once I’ve sorted out the aerial and found somewhere in the car to put the radio. 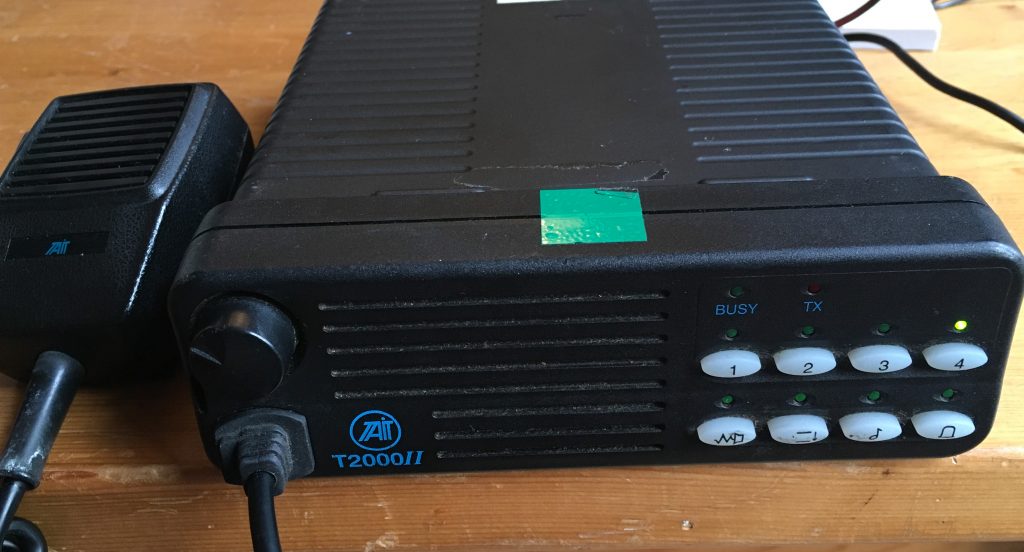 The Tait T2010 radio is now fitted in the car.  I hadn’t got a clue where to put the radio so my wife said she’d have a look and… there you go, job done! I should have asked her in the first place. It’s in the passenger foot well to the left of the centre console. I’ve used a cable tie fixed to a couple of metal rods which support a net bag for maps or whatever. It’s out of the way and yet easy to reach, but I might have to lengthen the microphone lead as it’s a bit of a stretch at the moment. I hate modern cars! Horrible grey plastic dashboard, nowhere to put anything… Grr! Bring back the old cars with a parcel shelf and plenty of places for radios. And easy access to 12 Volts. 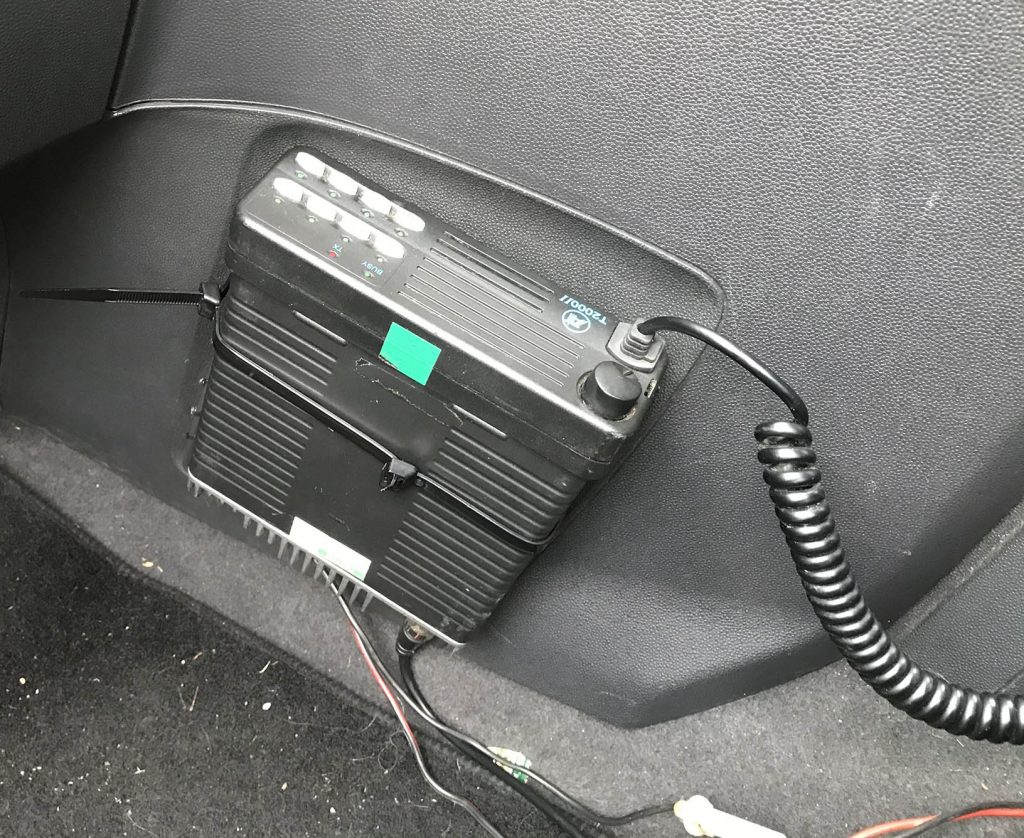 I’ve had to lengthen the mobile aerial by an inch or so by sticking a crock clip with a short piece of wire on the top. SWR is now 1:1. This is a temporary measure just until I get round to extending it properly. 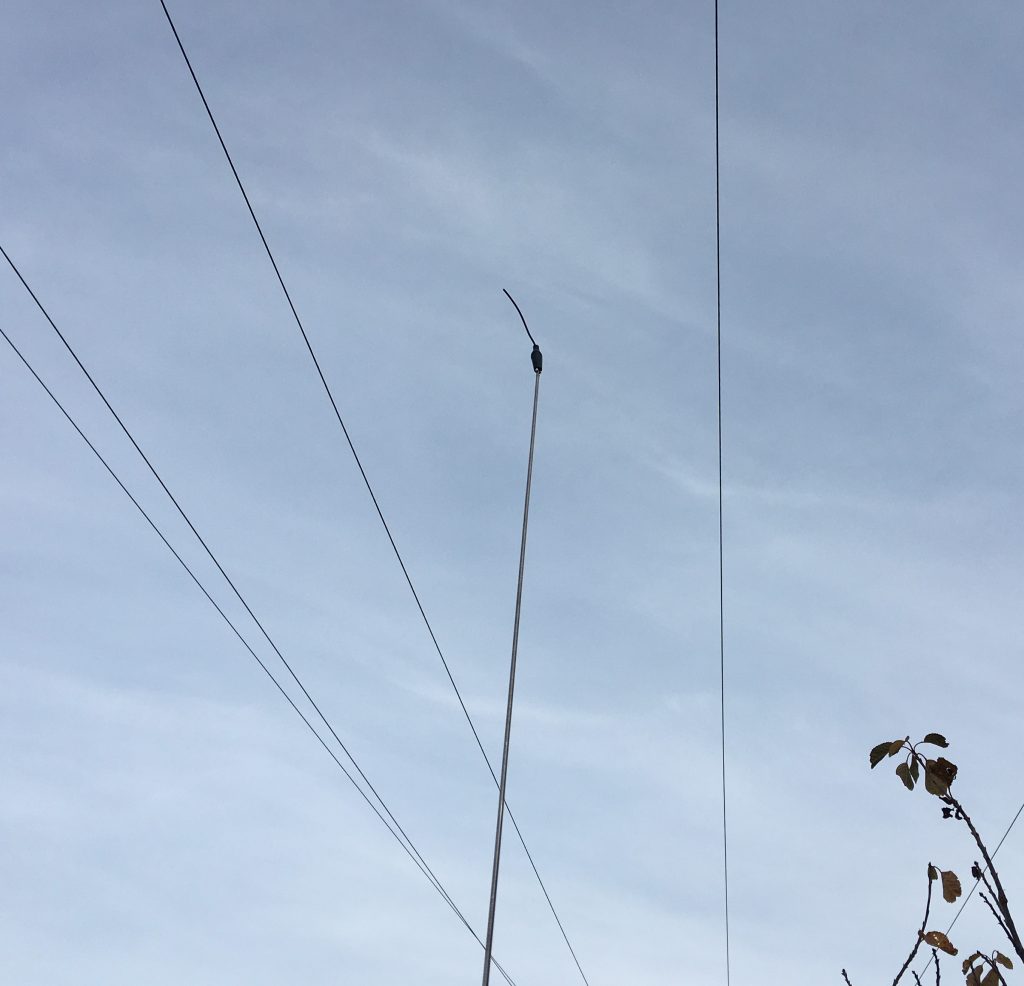 First mobile to mobile contact this evening. We were only about a mile apart but there was considerable flutter. I was stationary at the railway crossing gates, parked between buildings, so I was probably in a black spot. Good fun, though.

The 4 metre amateur band is now humming with activity in and around Worthing in West Sussex. A call on 70.450MHz is rarely met with silence. In fact, 4 metres is now busier than 2 metres. I never thought that would be the case!

If you need a microphone extension lead for mobile use, you’ll need a 6pin RJ12 lead. This one from eBay works perfectly. It’s made life so much easier! I no longer have to stretch the mic lead – or my neck! 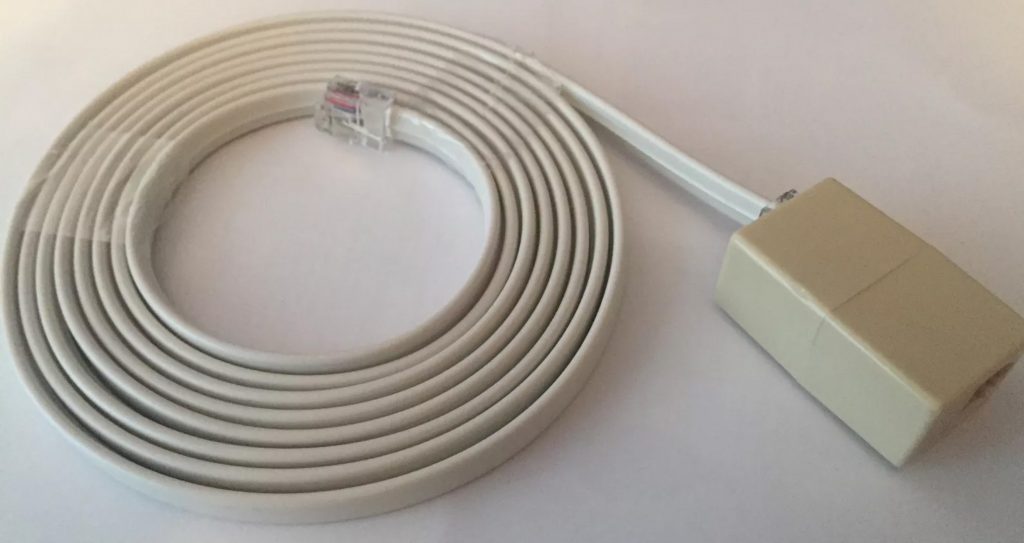 The J-Pole antenna By W8JI

Here’s a very good article on the Sirio CX 4-68 aerial by Frits, PA0FRI.

For your interest, here is a 4 metre WebSDR