Correctly termed, the AMU is an aerial matching unit. It does NOT tune the aerial.

The AMU transforms the impedance from two-thousand ohms to fifty ohms. In other words: two-thousand ohms in, and fifty ohms out. A mains transformer transforms 240 volts to, say, 12volts. It doesn’t somehow alter the mains supply voltage. That remains at 240 volts no matter what you do. Remember, an AMU does NOT improve the performance of an aerial. A poor aerial is a poor aerial, no matter what you do at the feed point. Frightening stuff? Not really. What is frightening is the misconception, the myths, surrounding this impedance matching device.

Shown below is my Lake Electronics TU1 MK2 aerial tuning unit, aerial matching unit, circa 1988. I use this with my Lower HF-150 communications receiver which has no front end selectivity. The matching unit helps with out of band second order intermodulation problems. The lower photo shows inside the matching unit. I’d really like to replace the horrible Belling Lee coax sockets with SO239 sockets but I don’t want to modify the unit. 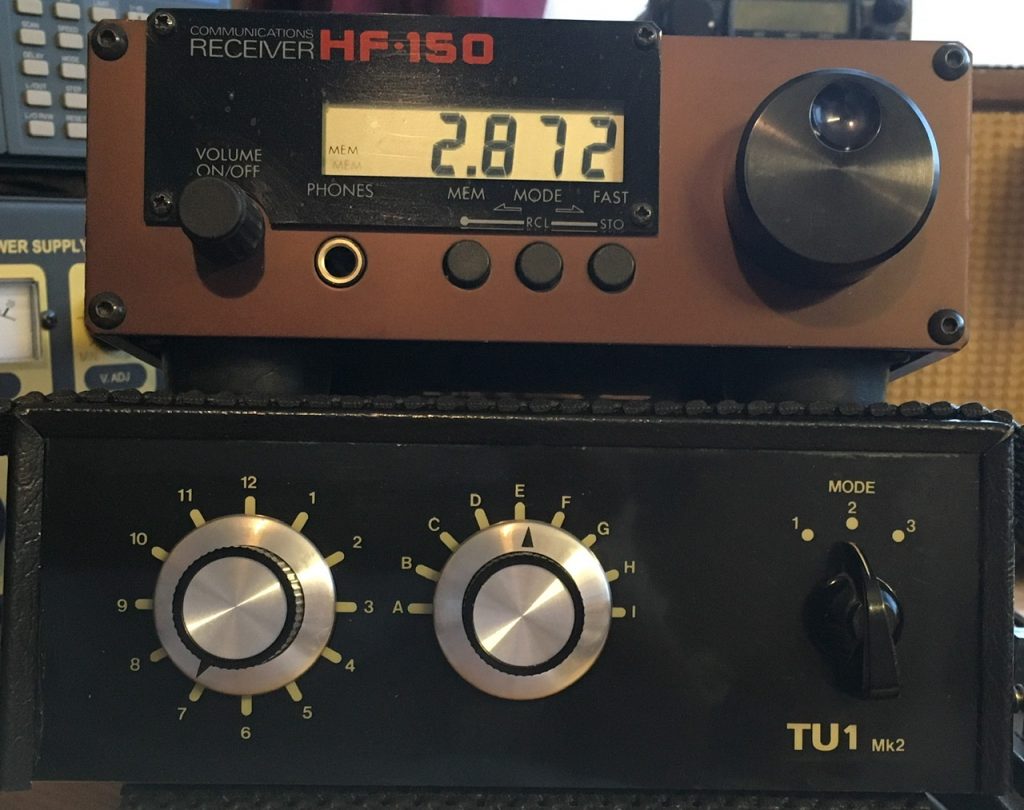 Shown below is the original L Match unit with Belling-Lee coax sockets and the so-called mode switch which, I believe, was wired incorrectly. 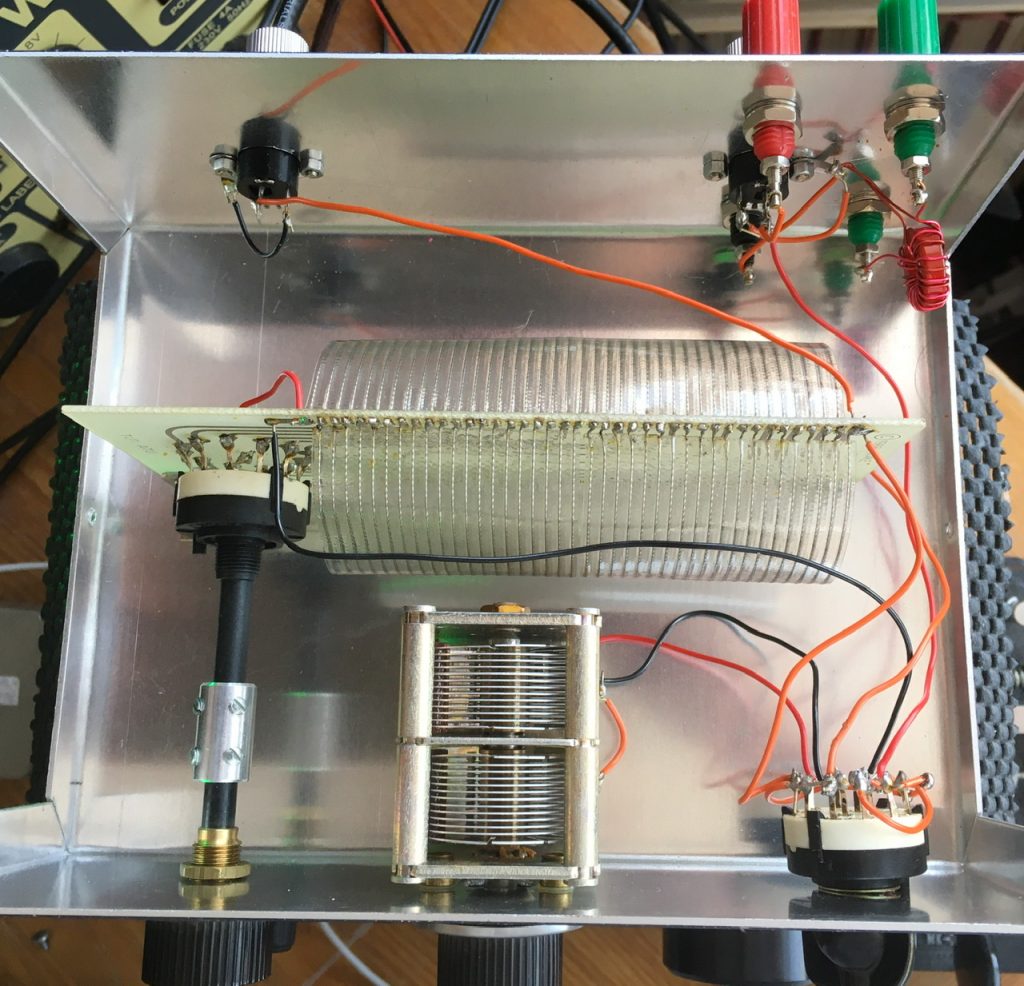 I couldn’t cope with intermittent coax sockets so I’ve fitted SO239 sockets instead. Also, I didn’t like the L-match circuit with a mode switch. I removed the rotary switch and fitted another variable capacitor to create a Pi network. See photo below. The unit can be returned to its original condition quite easily, which is important when modifying vintage gear. 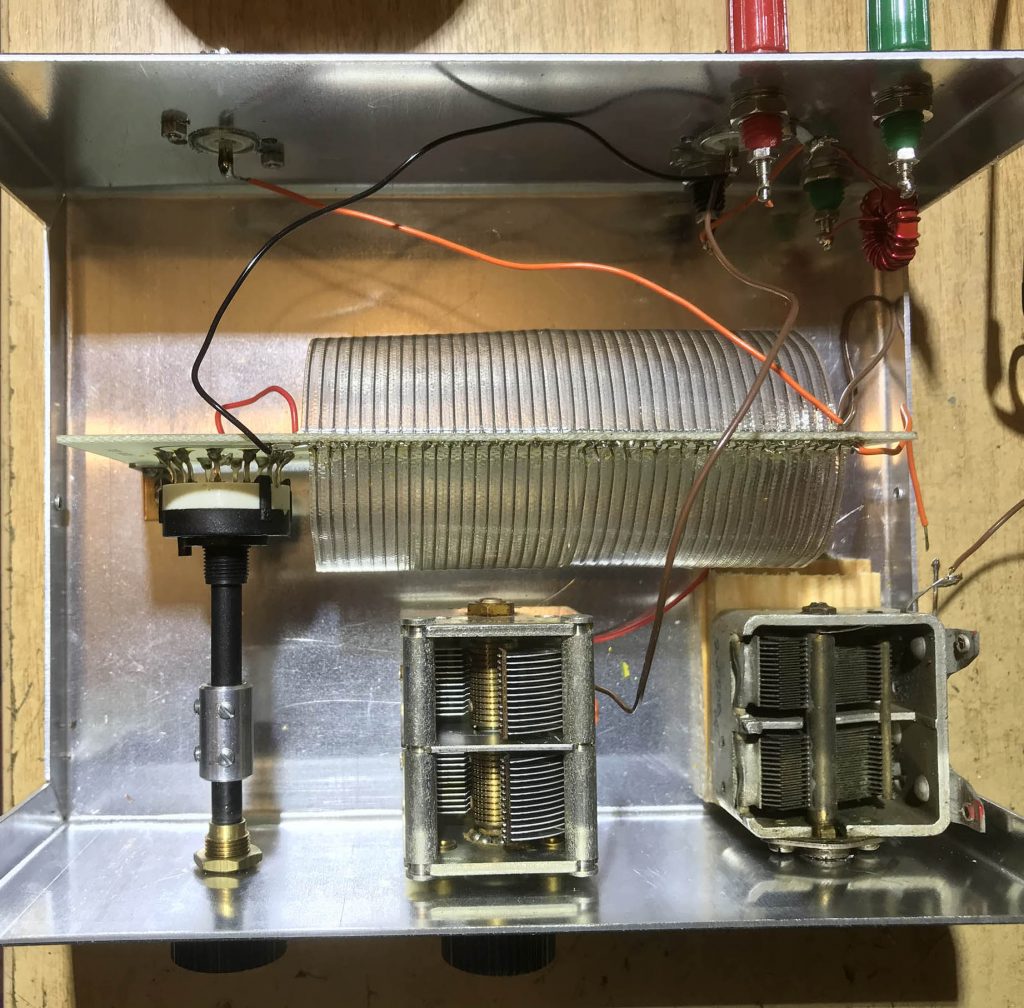 Below is my CAP.CO S.P.C.300 ATU. This is brilliant! A lovely roller-coaster and two beautiful variable capacitors, this unit will match anything from 1 to 30MHz. I’ve also included a photo showing the inside of the unit very soon. This is a fantastic AMU for using with a doublet. 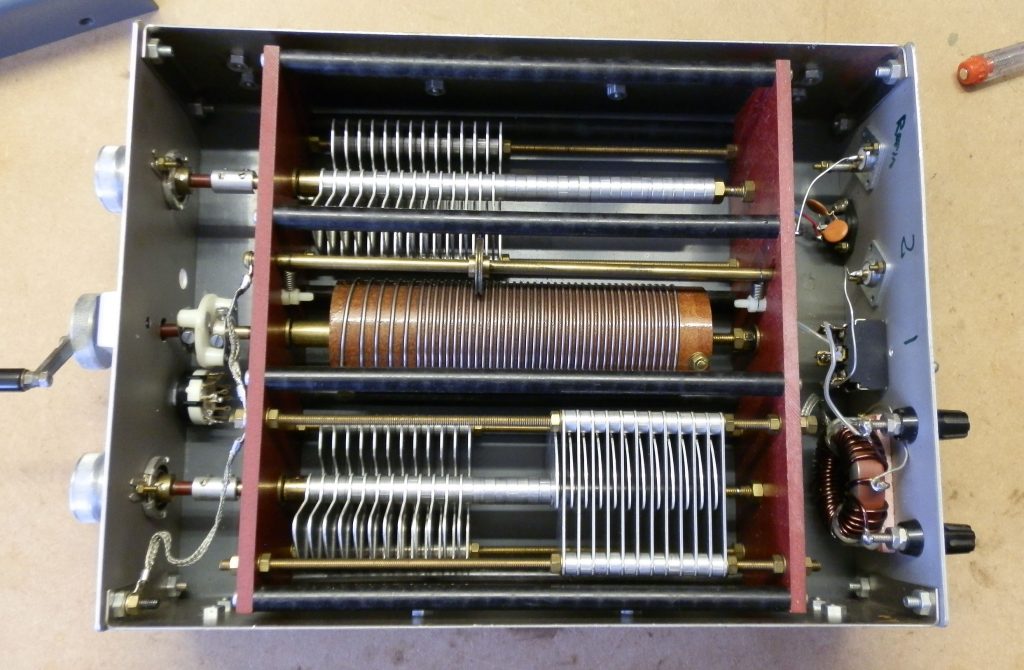 Below is my S.E.M Transmatch. I use this with my doublet and my Kenwood TS570D. Initially, I thought this would be rubbish so I sold it to a chap on an auction site. He came back to me and said that it didn’t work. I refunded him and tried it myself. It worked really well so I decided to keep it. His loss, not mine!

The photo below shows the inside of the SEM Tranzmatch. I don’t think much of the dummy load, it’s just a few 2 Watt resistors in parallel. I suppose it’s all right for low power but it’s pretty much a waste of space. I don’t think much of the Ezitune feature, either. It’s another unnecessary waste of space. However, it’s s great aerial matching unit and I’m very pleased with it. Below is my KW-107 Supermatch. After many years, I finally sold this one. The main reason was that is doesn’t cover top band. No doubt I’ll regret it but, hey ho! 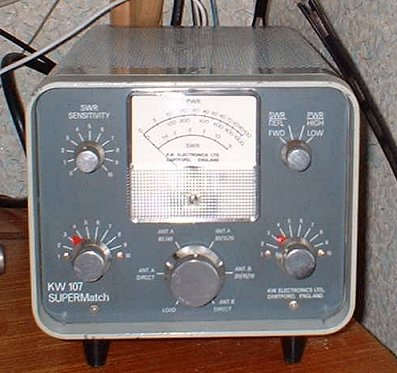 This is what’s known as a variometer, a rotating coil within a fixed coil. I think it was made by Marconi. I can’t remember where I got it from but I believe it was originally from a ship’s radio room. The outer coil is 6 inches diameter and the inner is 5 inches diameter. No doubt it would handle quite a few Watts. It’s perfect for matching an end-fed wire, even on medium wave! Not that I’ve tried it, of course. Better than medium wave, it was probably used for reactive loading of a 500kHz maritime antenna. I’m not surprised that it works so well on medium wave. 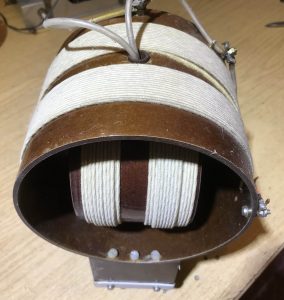 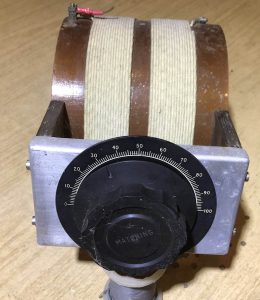 I bought this one, shown below, from a friend recently. Judging by the size of the variable capacitors, it’s obviously for low power TX or receive only. It will make a nice preselector for a comms receiver. There are 11 taps on the coil and it would appear that the unit can be switched between various configurations. There’s no manufacturer’s name on the unit but I don’t think it’s home made. The steel case was rusty so I’ve rubbed it down with wet and dry and I’m in the process of spraying it black. The coil tap switch and steel cabinet are shown below.  I’ve rubbed down and primed the rusty cabinet ready to take the black gloss topcoat. It’s taken a considerable amount of work but I think it will be worth it in the end as it’s a nicely built unit. Does anyone recognise it? Make, model? 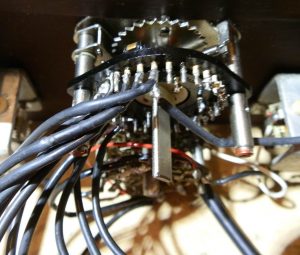 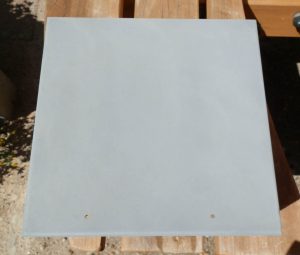 Reassembling the ATU, below. The unit is now mounted on its base. The steel cover has been sprayed and will be bolted in place very soon. I need to label the configuration switch, top centre, to show Pi – L – Series tuned circuit. Parallel tuned circuit and Off. I’ll probably rewire the off position to short the aerial to earth rather than leave it floating. 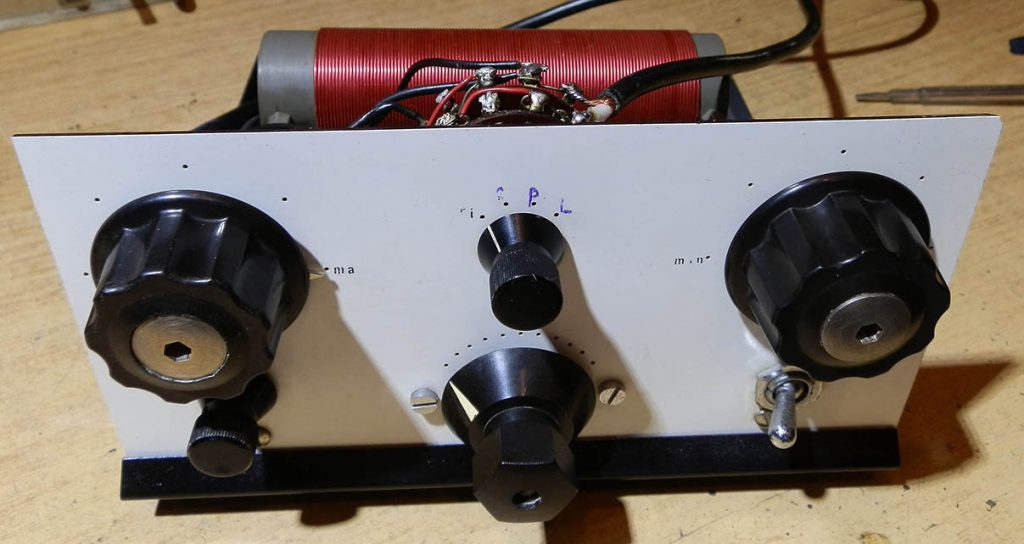 The ATU ready for service. I have to say I’m rather pleased with the result. Once the Letraset arrives, I’ll label the configuration switch positions. 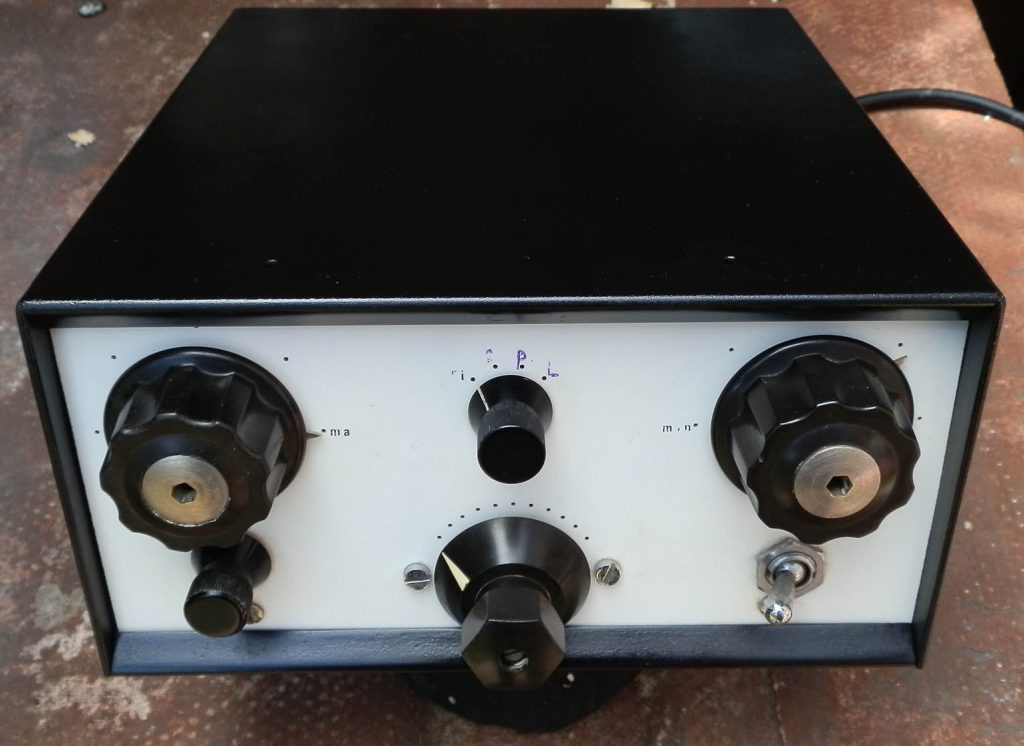 Looking good and working well with the Lowe HF150 receiver. Switching in the series tuned circuit does wonders for the Lowe receiver by allowing the resonant frequency to pass while greatly attenuating all others. 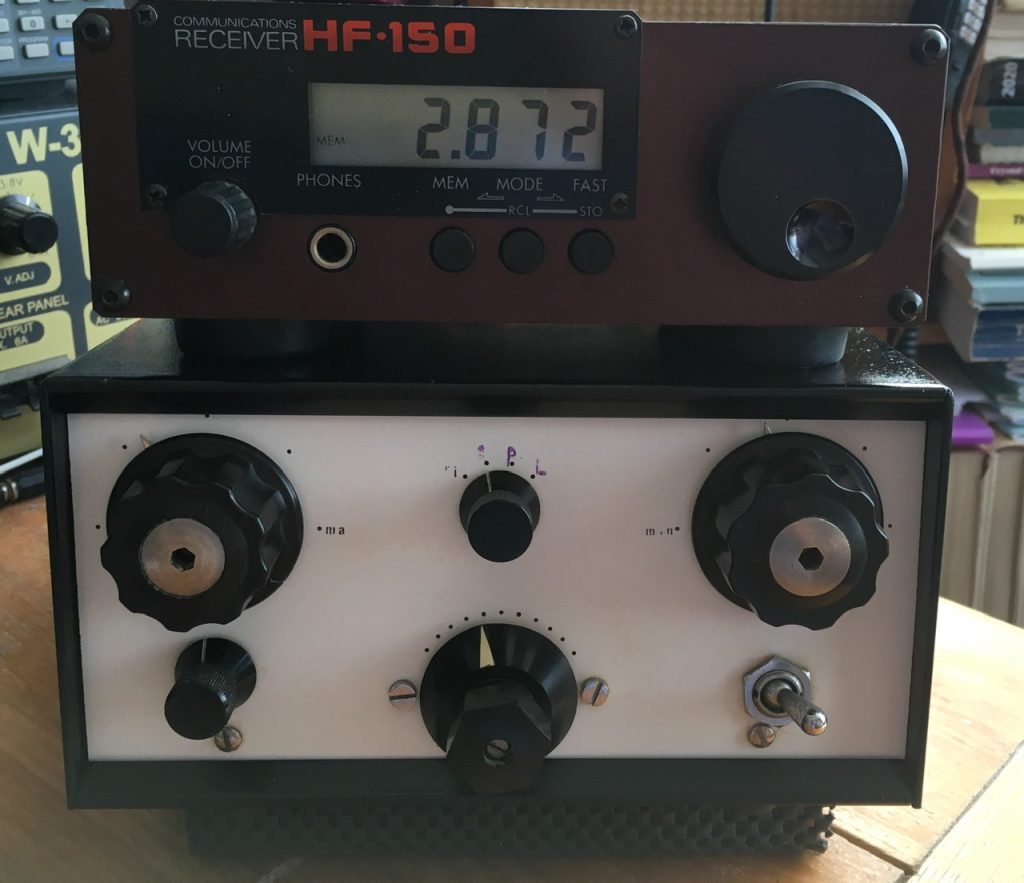 This Canadian AMU is my latest acquisition. The user manual is here. Below is my home-brew L-Match ATU. I knocked this up many years ago to match an end-fed wire on top band, and it was perfect. I still have it, collecting dust on a shelf. Here’s another one I made, this time with a small rollercoaster. I used this to match a 40 foot vertical aerial. The base of the vertical is on a wooden block which is on a brick. All rather temporary! This is how the base of the aerial ended up… on a railway conductor rail insulator! A simple L-match is shown in the circuit above, left. This is the arrangement I use to match my 150 feet of end-fed wire. L is a roller coaster and C a wide-spaced variable capacitor, about 500pF. From 80 metres to 10 metres, I get a perfect match.

For 160 metres, I have to switch the capacitor in series with the aerial and short out the coil, as in the diagram above, right. This is because my wire is too long for top band, resonating somewhere near to 1.6mHz. Effectively, a coil in series with a wire aerial electrically lengthens the aerial, and a capacitor is series electrically shortens it.

The aerial socket on the back of your transmitter wants to ‘see’ fifty ohms. And this is exactly what it does ‘see’ when it ‘looks’ into the AMU circuit. Before you grab some bits out of the junk box and build this matching unit, there are a couple of things to bear in mind.

Depending on the frequency you are using and the length of your end-fed aerial, the feed impedance of your aerial may be very high or very low. If your aerial happens to be one half-wavelength at your operating frequency, the feed impedance could be in the region of 5000 ohms. Does this matter? If the aerial matching unit is good enough to match this impedance then, no, it doesn’t matter. What does matter are the high voltages present at the feed point. The variable capacitor will flash over unless there is a sufficient gap between the vanes or plates of the capacitor.

Unfortunately, decent variable capacitors are hugely expensive and there are virtually none around on the secondhand market. However, you’re going to have to get your hands on one somehow. High voltages will also be present in the coil. A flimsy thing would with very thin wire on a cardboard toilet roll tube will probably catch fire. Imagine, when you are constructing your aerial matching unit, that it will be dealing with 1000 Volts or more and you shouldn’t go far wrong.

Just out of interest, the variable capacitors used in the final stages of high power transmitters are placed in a vacuum. This way, the capacitors may be relatively small. By small, I mean taking up several feet rather than an entire room. An electric arc needs oxygen to survive. Take the air away, and you will drastically reduce the possibility of arcing. A vacuum is also used for high voltage switching on the national grid. On lower voltage circuits of around 33kv, the switch contacts are immersed in oil.

What does make me laugh, and annoy me, is the way manufacturers rate their tuning units at 1kw or more when they’re using what amounts to broadcast receiver variable capacitors in their so-called ATUs. These capacitors were great in the old mains radios. But they have very little spacing between the vanes and are liable to flash over when loading an end-fed wire which is voltage-fed. The capacitors may be fine when using a current-fed aerial, but they are no good for voltage fed aerials.

THE BALANCED MATCH
This is the ultimate aerial matching unit.

Now we come to a real aerial matching unit, the mother of matching units. This will match balanced line or single wire end fed aerials. The components used are few and simple. However, trying to get hold of them is a different matter. A split stator capacitor will cost you in the region of £80 or more, and as for the coils… Let’s not get despondent before we even consider constructing this AMU. Split-stator capacitors are used to preserve balance across the circuit. The split stator capacitor problem can be overcome by using two separate capacitors ganged together. But the cost is still immense.

One form of split stator capacitor is shown here. Basically, this type is two variable capacitors on one shaft. The rotors or moving vanes are electrically connected whereas the stators are isolated from each other. For some reason, probably due to lack of demand, these capacitors are costly.

I was lucky enough to purchase a KW107 Supermatch ATU. This fine piece of kit is British made but, sadly, they’re no longer manufactured. If you can get your hands on one, then grab it.

The KW Supermatch has two coax outputs and two balanced outputs. It also has a built-in SWR meter and a 300 watt dummy load. With no lossy baluns in sight, this really is an amazing machine. The diagram shown on the right is the basic circuit of the KW E-ZEE match and the KW107 SuperMatch ATUs. Unfortunately, I don’t have the full circuit showing switching etc. However, this gives a pretty good idea of how the thing works.