This is a good subject, but one I can’t go into great detail because I don’t know enough about it. However, I think a few things should be cleared up where balanced transmission lines are concerned.

The feed impedance of a half wave dipole on its operating frequency is in the region of 50 ohms, an ideal match for 50 ohm coax. This is a great one-band aerial. But, if we use the same aerial and coax on another band, the feed impedance might be in the region of 1000 ohms. There’ll be a huge mismatch to the coax. OK, so you use an ATU and tune out the SWR and it works… Sort of. The losses in the coax will be immense and, overall, the system will be pretty naff.

We’ve been brought up with the idea that running an aerial system with a high SWR is verging on a criminal offence. The reason is that a length of coax with a high SWR is hugely lossy, the power being dissipated as heat in the feedline. But this is not the case when using balanced feeders. 300 and 450 ohm balanced feedlines are practically lossless on the HF bands, even when the SWR is high.

A 1db loss may not seem significant but, if you stuff 100 watts into a system with a 1db loss, about 80 watts will come out. A 2db loss with 100 watts in means that about 63 watts are will dribble out. Remember that this loss is only true in a matched system where the antenna feedpoint impedance, the feedline impedance and the transmitter output impedance are all the same. These losses may seem small, but do remember that they increase dramatically as the SWR increases.

OK, so we have a half wave dipole resonant on the 40 metre band. The feed impedance is around 50 ohms, ideal for coax. If we feed this dipole with 450 ohm balanced transmission line, there’s going to be a massive mismatch at the feed point. What does this mean? Big mismatch = high SWR. A high SWR on coax is a bad thing as the coax will become extremely lossy. However, a balanced feeder can withstand a very high SWR with negligible loss.

A nonresonant line is one which is terminated in its characteristic impedance – i.e. a 50 ohm line and an aerial with a feed impedance of 50 ohms. Since no reflections occur, all the energy traveling down the line is absorbed by the aerial. Since no standing waves are present, this type of line is sometimes spoken of as a FLAT line.

A resonant line is not terminated in its characteristic impedance. In other words, the line may be 300 ohm ribbon looking at a 50 ohm aerial feed impedance. This means that a high SWR will occur. An ATU is used to eliminate the reactance and to bring about maximum power transfer from the source to the line. Therefore, a resonant line is sometimes called a TUNED line.

On one band, the feed impedance of our aerial might be 450 ohms, great for our balanced feeder. On another band, the impedance might be 1000 ohms or 50 ohms. It doesn’t matter whether the SWR is high or not as the losses are small. What does matter is that you have a good ATU which can handle very high currents and voltages.

Why are the losses small? With tuned lines, we completely ignore the sometimes huge mismatch at the antenna end, and compensate for the mismatch with the tuner at the shack end of the line. The SWR may run as high as 10 or even 20 to 1, but the power reflected from the mismatch is re-reflected back to the antenna by the tuner. Tuning for maximum line current simply adjusts the phase of the reflected wave to re-reflect down the line in phase with the forward wave, again reaching the antenna. Thus the reflection loss from the mismatch is cancelled by the reflection gain of the tuner. And that is the secret of the so-called doublet aerial.

Manufactured feeder comes in several different impedances. There’s 300 ohms, 450 ohms and 600 ohms. Which one do we use and why? What’s the difference? To feed a doublet, which is basically a dipole, the majority of people use 450 ohm line. This is because the input impedance of the aerial might be 600, 700 or 800 ohms on one band and perhaps 100, 200 or 300 ohms on another. Obviously, 450 ohm feeder is half way between 300 and 600, giving a pretty good compromise.

With any balanced aerial system, you must use a proper ATU. By proper, I mean balanced. By balanced, I don’t mean the “balanced” ATUs available from manufactures at extortionate prices. The majority of ATUs on the market today incorporate a 4:1 balun. They are NOT balanced ATUs. In fact, they are very often a simple L match. 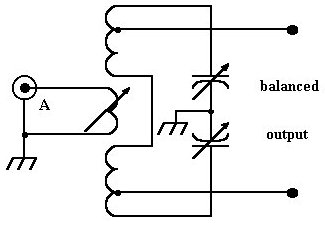 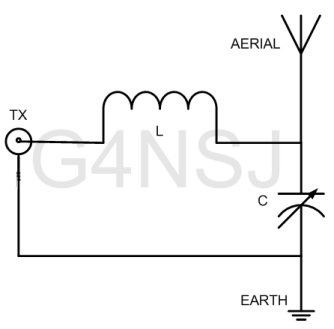 The ATU on the left is balanced. The one on the right is NOT.

With balanced feeder, it is important to keep the line clear of metal objects etc. However, I’ve just erected an 130 foot doublet fed with 300 ohm ladder line and, contrary to popular belief, it seems that nothing affects it. Even coiling the feeder on the shack floor doesn’t seem to make any difference. Although, it’s probably not a good idea.