An old mate of mine is thinking of erecting an inverted L aerial. This is a great idea, but he wants to feed it with coax. A single band inverted L fed with 50 ohm coax? No problem. You adjust the length of the horizontal section of the aerial until you have a 50 ohm feed impedance, which will match the 50 ohm coax. Of course, you’ll have to have a good earth system, radials etc.

What some people do to use the same aerial on another band is stick a matching unit at the shack end of the coax. Let’s assume that our inverted L was cut for 160 metres, matching perfectly to the 50 ohm coax. That’s great, but what happens when we use the same aerial on 80 metres? The feed impedance of the aerial at this frequency is no longer 50 ohms. In fact, it might be as high as 1000 ohms or more. 50 ohm coax looking into a feed impedance of 1000 ohms? Er… I don’t think this is right. So, our knowledgeable radio amateur stuffs the shack end of the coax into his matching unit and tunes out the SRW. One to one. Brilliant! The output of the transmitter is seeing exactly what it wants, 50 ohms. Hang on a minute. The 50 ohm coax at the aerial end is still looking at a feed impedance of 1000 ohms. The matching unit doesn’t change the impedance of the coax, and neither does it change the aerial’s feed impedance. The result? The massive mismatch at the aerial feed point still exists.

HERE’S A SIMPLE WAY TO LOOK AT IT 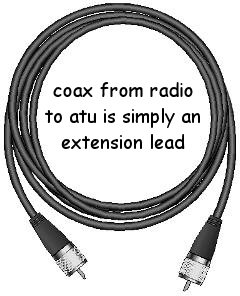 The length of 50 ohm coax you plug into the back of your tranceiver is like an extension lead. You are simply moving the 50 ohm socket on the back of your radio to a point several feet or yards away from the radio. This may be 100 feet away, down to the end of the garden, for example. And that is where you must place the matching unit. You must match the 50 socket on the back of your radio to the aerial. Bring the aerial wire into the shack and straight into the matching until, and you may only have a couple of feet of coax between the AMU and the radio. Stick the end of the coax (your extention lead) down the end of the garden, and that is where the AMU has to go.

An automatic ATU is just the job, but very expensive. A manual ATU will work perfectly, but you’ll have to run up and down the garden a hundred times to adjust the thing. Whatever you do, don’t feed this type of aerial with coax unless you’re going to stick to one band or use a matching unit at the end of the garden. Some people will say that I’m wrong and the thing will work with an ATU in the shack. Yes, it might work. But the massive mismatch won’t go away. The outside of the coax will radiate, the SWR on the coax will be horrendous, there’ll be massive losses, and I dread to think what other nightmares will happen within the coax. Remember that a matching unit at the shack end of the coax will not change the feed impedance of the aerial or the impedance of the coax. It’s as simple as that.

You can buy a matching unit for use on 2 metres. Coax in from the aerial, coax out to the rig. This is going against all I’ve said, but… If your SWR is slightly high, the protection circuit in the rig will shut down the PA. By using a matching unit to tune out the SWR, the rig will ‘see’ 50 ohms and run at full power. This is acceptable where the SWR is slightly high. But not where there are massive mismatches at the aerial end of the coax.

To keep things tidy and convenient, I use coaxial switches, shown below. Only use these for HF as they will be lossy at VHF and UHF. I’ve colour coded the coax with heat shrink sleeving so I know what’s what. Blue, Mini Whip active antenna. Yellow, doublet feed to Hf rigs. Red, 10 metres. 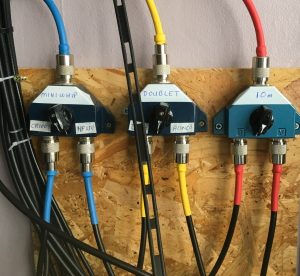 On other equipment, I use green for my marine aerial, black for 446 etc. Hopefully, the days of wondering which coax cable is connected to which aerial have gone!