What is a doublet? What should the aerial below be called? Basically, it’s in the form of a dipole fed with balanced feeder. This is what I’ve gleaned from scouring the internet…

1) A centre fed aerial which is too short on the operating frequency.
2) Any aerial fed in the centre with balanced line.
3) An aerial where the balanced line is exactly the same length as one leg of the dipole.
4) Doublet, dipole… There’s no difference.
5) Any centre fed aerial working away from it’s resonant frequency.
6) An article of clothing.

FLAG POLE SUPPORTING ONE END OF MY DOUBLET

This is a good idea if you have neighbours who aren’t keen on aerials. Flying the flag… and supporting my doublet! I can’t go too high because, as you can see, there are telephone lines running across the front garden. You can just make out the wire aerial at the top of the pole, insulated with cable ties. 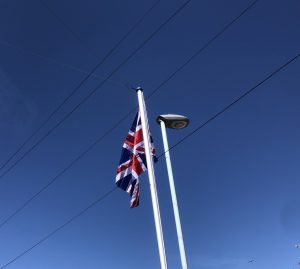 One mystery which needs dealing with is the length of the feedline on this type of aerial. It does NOT have to be cut to any particular length. All you do is cut it to the length you need. However, you might find that on one or two bands you can’t get a 1:1 SWR. This doesn’t mean to say that something is wrong. All that is happening is that your ATU is looking at an impedance at the shack end of the line that it can’t handle. The answer is to shorten or lengthen the line by a few feet.

The reason some articles give a feed line length is because a certain length of balanced line for a certain aerial will give an overall acceptable impedance at the ATU on all bands. By acceptable, I mean an impedance which the ATU can cope with. A decent ATU will be able to cope with all impedances at the shack end of the feed line. But, not all ATUs are decent. Far from it, in fact. 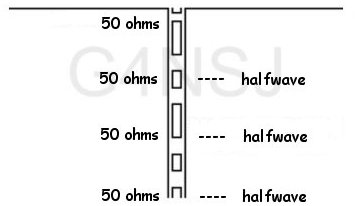 Why doesn’t the aerial load on one or two bands? An all-band doublet shows a different feedpoint impedance at different operating frequencies. The exact length of the antenna relative to the frequency will determine that impedance. The feedline will transform that impedance continuously along its length, repeating values every half wavelength of line. By adjusting the length of the line, you are changing the impedance the ATU sees on all bands. Some juggling of the feeder length may be necessary to ensure that your ATU can handle the impedance it sees on each of the bands. Take a look at the diagram on the left. We’ll assume that the dipole is cut to the frequency we’re working on. So, the feed impedance of the aerial is 50 ohms. OK, so that doesn’t match the 300 ohm feeder but that doesn’t matter.

By looking at the diagram, you’ll see that the impedance repeats itself at every halfwave length down the line. As I’ve said, the line transforms the impedance continuously along its length. If the line is cut to a certain length, the impedance at the shack end of the feeder will be 50 ohms. Obviously, this is a good match for 50 ohm coax. But, between each 50 ohm point, the impedance might be 600 ohms or more. Forget the coax!

If your balanced ATU can handle this impedance, then all well and good. If it can’t, then lengthening or shortening the feedline will change the impedance at the ATU. Have you grasped that? I know that it is sometimes difficult, especially with my explanation!

This has to be one of the most popular aerials around. Basically, it’s the balanced-fed dipole above but with a length of coax connecting the end of the feeder to an unbalanced ATU. If the length of the dipole and the feeder are about right, then the impedance at the shack end of the feedline might be somewhere near to 50 ohms on all bands. Hence the coax between the feeder and virtually any old ATU. Presumably, the advantages are that coax comes into the shack rather than balanced line and there’s no need for a balanced ATU.

STICKING UP AN AERIAL

When considering which type of aerial to put up, remember to take into account such things as gain, directivity and noise. A low dipole will tend to fire the signal straight up (NVIS) where it will bounce off the ionosphere and come straight back down again. This might be good for inter-G working on forty metres, but not for DX. An end fed wire, far too long for the band you’re on, can be very noisy, picking up all sorts of junk from various directions. A vertical should be pretty good for DX with its low angle of radiation, but poor for inter-G working.

I heard a chap on 5mHz the other day. His top band doublet raised the noise level on 5mHz by three S points. It was great on TX, but pretty naff on RX. His loop aerial was generally down on the doublet, on TX and RX, but far better for working the weaker stations. Food for thought?