I’ve been using 150 feet of end fed wire on 80 metres. The end comes into the shack where it connects to the AMU. Great, it works well. But I’ve always been plagued with noise – 10 over 9 or worse. So I decided to experiment. I cut off the 20 feet of wire that ran through a roof tile up in the attic and down through the ceiling to the shack and replaced it with 300 ohm twin. One wire of the twin feed goes to the aerial and the other… Goes nowhere. This has transformed 80 metres. The noise level now is around S6. The end fed Zepp is one of the oldest aerials around. And it works extremely well. No, the signals aren’t any stronger. Why should they be? But the noise level has gone down dramatically. Check out the diagram below and you’ll see what I’ve done. 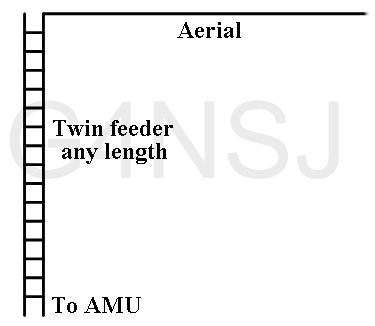 So, what happens at the feed point of this peculiar aerial? One conductor of the feeder obviously goes to the aerial. The spare conductor, which goes nowhere, sees a very high impedance. Well it would, wouldn’t it? I mean, it ends in thin air. But, the other conductor also sees a high impedance at the aerial wire connection. So the end of the twin feeder sees a sort of balanced load.

The aerial connection might be around 5000 ohms and the thin air connection a few million ohms. But it works. The reason there’s a balance has something to do with the very high voltage at the feed point.

I did have a slight problem with high RF voltages at the shack end of the feeder. Even my battleship KW107 Supermatch flashed over when I ran 100 watts. Bear in mind that any balanced feeder transforms the impedance along its length. For example, 50 ohms is repeated every half wavelength. As I only used about twenty-feet of twin feeder, the impedance at the AMU was still very high – as was the voltage. The answer was to lengthen the feeder to a quarter wave on 80 metres, which is about 20 metres, bringing a current node to the shack end of the feeder. I now have a low impedance at the shack end… No more sparks.

I must admit that I’d never even looked into the Zepp aerial, let alone tried one. What it’s like on other bands, I’ve yet to discover. But do remember that it will only work where there’s a high Z at the feed point. i.e. on the band or multiples of the band the aerial is cut for. So far, the results I’ve had on 80 metres have been amazing. Not least, the fantastic reduction in noise which was picked up in the house from mains wiring etc. Only the feeder enters the house now. And, being balance, it picks up very little noise.