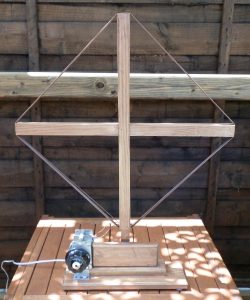 Below is a very rough sketch of my prototype frame aerial. Click on the image for a larger view. The variable capacitor is a two gang type, each section approx 500pF. You may find that one gang is enough but you could try the two gangs in parallel to give 1000pF. Any thin insulated wire will be fine for the aerial windings. The twin wire from the frame to the aerial and earth sockets on the radio is bell wire, the length isn’t critical. 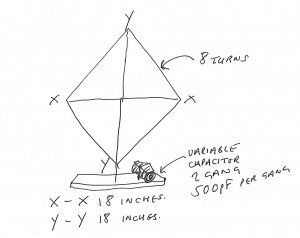 A frame aerial calculator is here. This will be useful if you want to design your own larger aerial or one covering different frequencies.

This is a small, straightforward aerial to get those interested involved in construction. Soon, I hope to be making a larger aerial for some serious medium wave DXing. I’m not sure on the size yet but I will place updates on this page. Happy listening!

I’ve now added a pick up or coupling coil to the frame. This consists of one turn of wire wound next to the main aerial winding. The coupling coil electrically isolates the aerial from the radio which aids matching and prevents the frame aerial from upsetting the radio’s aerial input circuits. I’ve also added four wander plug sockets on the rear to connect the lead from the radio either to the coupling coil or direct to the aerial winding. See the photo to the right. I’ve since added a screw to the left hand side of the socket strip… just in case anyone was thinking of having a go at me for bodging!

There are several advantages a frame aerial has over an length of wire. The signal to noise ratio is much improved as the frame aerial picks up far less interference than a wire running around a 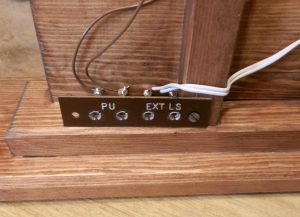 room or outside in the garden. The frame aerial is highly directional, so interference from machinery or other radio stations can be nulled out. As the aerial is a tuned loop, it adds a certain amount of selectivity to the radio as well as increasing sensitivity in some cases. Also, the frame aerial is a lot neater than having a wire running around the room.