Before going further, let’s be clear about one thing. A perfect SWR reading of 1:1 doesn’t mean to say that the aerial is perfect. Far from it, in fact. It’s quite possible to match your transmitter into a length of coax line with no aerial attached to the far end. The SWR will be 1:1 when matched but, obviously, you’re not going to work local stations let alone DX. You can stuff your feed line into a bucket of water and use an aerial matching unit to get a 1:1 SWR reading. It goes without saying that a bucket of water is a pretty naff aerial.

How does the SWR meter pick up RF from your coax? Take a look at the diagram below and you’ll see that the SO259 sockets on the back of your SWR meter are simply connected together by a length of wire. A second wire running close to this connecting wire picks up the RF. The two wires in the cheaper SWR meters are usually in the form copper strips on a printed circuit board.

I heard a chap on two metres the other day. He’d matched his two metre rig to his G5RV aerial and wondered why it didn’t work very well. He couldn’t understand it as the SWR was 1:1. This is a classic example of misinterpreting SWR readings. So, does SWR matter? It would appear, from the two metre chap’s findings, that SWR is meaningless.

Firstly, it matters because most modern transmitters have protection circuits designed to shut down the RF amp in case of a high SWR. If your transmitter is capable of pumping out 100 watts, then you don’t want the thing backing off to 50 watts because of a high SWR. But this isn’t the only reason that SWR matters.

Forget buckets of water for the moment and assume that there is a proper aerial connected to the far end of the feed line. We pump RF into the feeder in the hope that most of it actually leaves the aerial and goes around the world. If the SWR is high, then some of the RF is being reflected back down the feeder to the transmitter rather than leaving the aerial. This, obviously, is a waste of power. A high SWR reading may be due to several things: bad connections or corroded joints, for example. A high SWR isn’t necessarily the fault of the aerial.

Does SWR change with coax length?

You set up your aerial and trim its length to get the best SWR. That’s fine, until you decide to move your radio, which means lengthening the coax. You then find that your SWR has changed. I’ll be adding to this but, in the meantime, here is a very good article about SWR by Gordon, AD5GG. 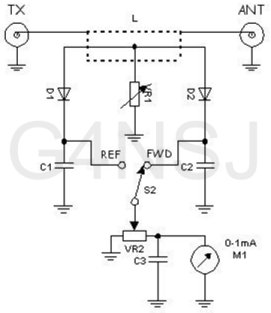 Take a look at the circuit to the left. The small signal induced in the pick up wire is rectified by a diode and causes the meter to deflect. Depending on whether the unit is switched to FORWARD or REFLECTED power, the appropriate diode delivers the small voltage to the meter. The capacitors are there for decoupling any stray RF and the pots are for adjusting meter sensitivity.