If you have limited space for aerials, then a tribander is a worthwhile investment. I prefer separate radios for separate bands, rather than a so-called shack in a box, so the triplexer is the answer… one aerial for three radios.

I’ve not yet carried out any tests with my Nano VNA, but I’ve received weak signals on 2 metres while transmitting on 6 metres, and vice versa, with no noticeable desensing.

Pictured below is my triplexer in situ. 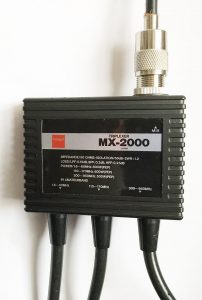 A Diplexer is a device that allows two different transceivers to share a single antenna. Both signals need to be at different frequencies by a significant amount so the filters can easily separate them. The frequency difference might be around 95MHz in the case of the 6 metre and 2 metre amateur bands.

A Duplexer is a device that allows a transmitter and receiver to use a single antenna simultaneously, while working on similar frequencies. A duplexer would be used on an amateur radio repeater where the difference between the transmitted and received frequencies might only be 600kHz.