I’d appreciate signal reports from near or far. I will reply to all emails and, once I’ve set up an eQSL card, I’ll send you one. Please note that the ground wave will only travel ten or twenty miles from the aerial. It’s the sky wave that will reach out to Europe and beyond, when conditions are favourable.

I’ve had a few local reports, which I appreciate. The ground wave is doing well, considering the low TX power. The beacon was heard 27 miles away on an Eton E5 portable radio at Beachy Head. Thanks for the report, Ian. Also heard at East Preston, as shown on Ed’s radio in this video. Of course, it’s the sky wave that will do the business when there’s an opening. I mustn’t be impatient. It’s early days!

I’ve been listening to 10 metre beacons for decades. Dotted all around the world, usually running 1 Watt or less, they can often be heard when propagation permits. They transmit ident messages in Morse code… call sign, QRA locator, power, type of antenna etc. Logging the beacons is another great aspect of the hobby but, what are these continuous transmissions for?

As we know, even during sunspot minima, 10 metres can open up and stations world-wide can be worked. Rather than continually tune up and down the band, hoping for an opening, you can tune into a known beacon and wait. If you’re in the UK, you might monitor the frequency of a beacon located in Italy or even South America. At some stage, you might hear faint Morse code signals emanating from your speaker. The band is opening. It’s time to call CQ DX. Or, if you’re a short wave listener, it’s time to have a tune around the band and see what you can hear.

A station somewhere in the world might be hoping to work European stations so he monitors a beacon located in Europe. Checking his beacon list, he discovers one in the UK and tunes into its frequency. The CW ident is heard, meaning that the path between his station and the UK is open. Time to call CQ Europe.

After many years of listening, I finally decided to run my own beacon. I had a spare HF transceiver, an Alinco DX-SR8, which is ideal for beacon use. The radio is stable, it runs 2.5 Watts on low power, the cooling fan is quiet and very efficient… it’s an ideal radio.

Pictured below is the Alinco, tuned to 28.252MHz. Also shown is the beacon’s dedicated power supply. The beacon keyer, the top unit, is working but just needs a LED indicator, hence the empty hole. Update: I’ve now fitted an LED and a 250mA fuse plus an idiot diode. 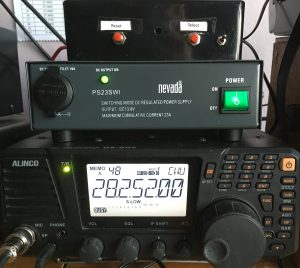 Here, the beacon is on test, running 2.5 Watts into my Marconi power meter. I’ve had this old power meter for years. It’s well built, as Marconi gear is, with a lovely 50 ohm dummy load. Max power is 25 Watts but the dummy load resistor is capable of far more. 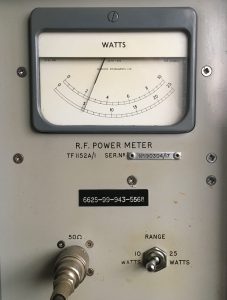 The beacon keyer I’m using is shown below. It’s available from www.transverters-store.com and is inexpensive. The keyer sends the station callsign, the word BEACON, then LOC and the QRA locator. I would have liked to include the TX power and a brief description of the aerial but there’s not enough memory. I spent an hour trying, unsuccessfully, to program the keyer. Had I read the comprehensive instructions beforehand, it would have taken me a few minutes. By the way, you will need a paddle-type Morse key, not a straight key, to program the keyer. You will also need to send Morse code at a reasonable speed, otherwise you’ll be timed out before you’ve sent the text. 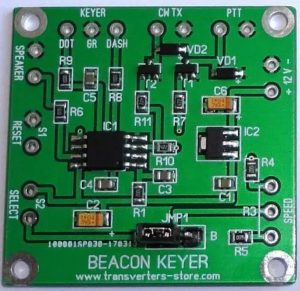 The aerial is a Sigma 5/8 wave vertical. The base is only 2 metres above the ground but I’ve worked Australia and America when the propagation has been favourable. I’m hoping to get some interesting reports when conditions permit. 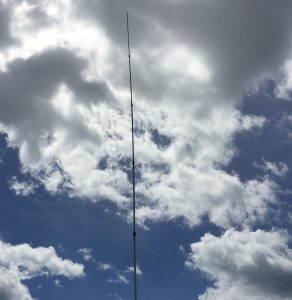 I’m considering using my Anytone AT555 rather than the Alinco. One reason is that the RF output power on the Anytone is variable down to about half a Watt. This may be useful if I need to change the power in the future. Also, the Anytone is a compact unit and, I believe, more suitable for continuous operation than the Alinco transceiver. However, there’s one problem. The PA transistors run cool but, the voltage regulator, mounted on the side of the chassis, has no heat sink…  and gets very hot!

I didn’t want to permanently modify the radio so the answer was to fit a large heat sink, as shown in the photos below. I’ll probably make up an aluminium plate to cover the top of the radio as the original cover no longer fits. I ran the unit at 2.5 Watts into a dummy load for several hours and the heat sink got pretty hot. This particular model is known for heat problems with the regulator. To solve the problem, I’ve added a cooling fan. The fan runs at 1000 RPM so it silently wafts a breeze between the heat sink fins.  Now, the heat sink barely gets warm.

The radio doesn’t look pretty but it’s not looks I’m after, it’s reliability over hundreds of hours of constant use. Also, the radio can be returned to its original state within minutes. 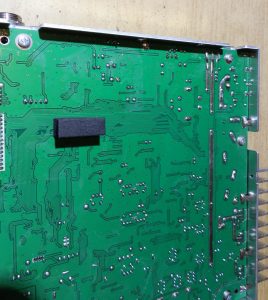 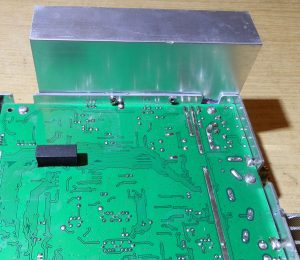 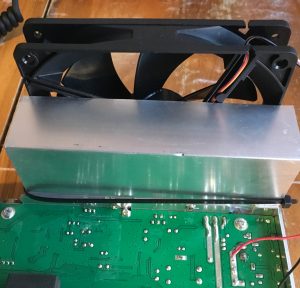 Below is the Anytone AT555 radio hooked up to the beacon keyer. The ‘beacon off’ notice is in keeping with regulations. This is to enable anyone to switch the beacon off, if asked.

In keeping with the regulations, I have to switch the beacon off quickly when instructed to do so by Ofcom. The transmitter will be unattended at times so I’ve used a smart wi-fi socket, operated from my iPhone, to switch the beacon’s power supply off when I’m away. 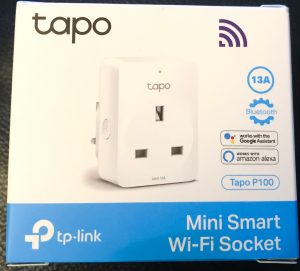 There are times, even at sunspot minima, when communication over long distances becomes possible on 10 metres. This is due to a phenomenon known as sporadic E or Es. As I mentioned earlier, this is where propagation beacons are really useful. Signals can be bounced off clouds of ionized atmospheric gas in the lower E region and returned to Earth many hundreds of miles away from the transmitter. The opening may last a few minutes or several hours, so monitor a beacon at all times if you’re interested in working DX on 10 metres.