It’s arrived! I’m now the proud owner of a Lister type D Stationary Engine. Nothing to do with vintage or amateur radio, I know, but great fun! The engine was manufactured in 1938. It has been modified to run on paraffin but, according to the previous owner, it will run happily all day long on stale petrol. The modification incudes, amongst other things, fitting a vaporiser block which brings the inlet and exhaust manifolds away from the block by a couple of inches and vapourises the fuel using heat from the exhaust

I believe the R at the end of the spec type stands for reverse. Below are the first two photos of the beast. There’s a fair amount of rust here and there but nothing too serious. It’s not been used for quite a few years but it’s not seized and, surprisingly, the oil looks pretty good. Before attempting to start the engine, I’ll drain the oil and flush out any muck, fill with fresh oil, fit a new spark plug, strip and clean the carburetor… Quite a lot to do. Once up and running, I’ll remove all the rust and paint the engine. 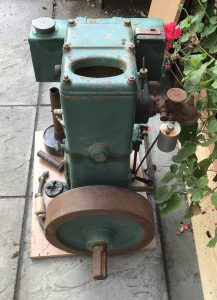 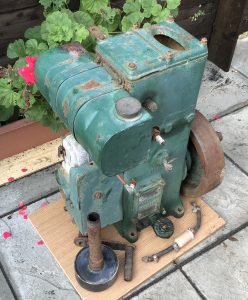 There appears to be shed loads of rust on the timing chain and sprockets. There’s no point in trying to clean up the old chain so I’ve ordered a new one. I’ve also ordered a new filter and fuel pipe as the old assembly looks rather knackered. I don’t think the fuel line and filter are original as all the engines I’ve seen use a copper fuel pipe.  I was rather concerned about the condition of the big end bearing so I removed the crank case door and had a look. I could detect no play at all between the crank shaft and connecting rod, which was a relief. 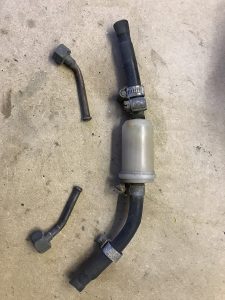 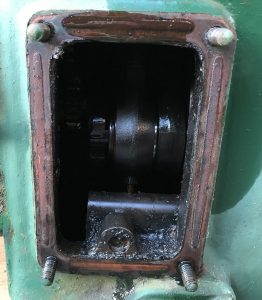 Initial tests on the magneto coil show that the secondary may be open circuit. This is a pain as they are very expensive… around £100 for the magneto assembly. I’m hoping that it’s a corroded connection but, if not, I’ll have to wire up an external ignition coil and a small lead-acid 12 volt battery to run the engine. It will do for now, and produce a stronger spark, but I want to keep the engine original so I’ll replace the magneto coil if I have to.

Just picked up a trolley for the engine.  Nicely built and very sturdy! Which it needs to be as the engine weighs around 298lbs. That’s around 21 stones! 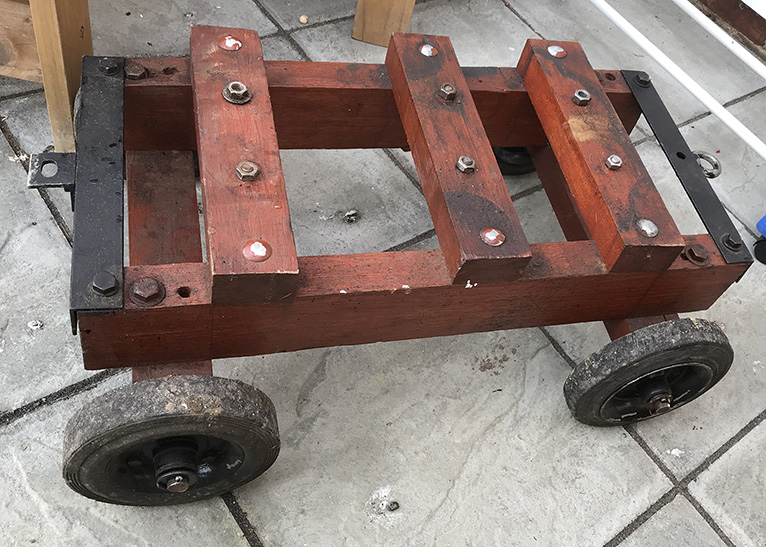 And interesting discovery. Most Lister D engines run in a clockwise direction, looking at the flywheel. This one has been modified to run anticlockwise. To reverse an engine, a new starting handle and dog, for the handle to engage, are needed. Also, a reverse magneto must be fitted and the carburetor and exhaust have to be swapped round. On my reverse engine, it would appear that the carb and exhaust have been fitted the wrong way round. By the way, the inlet and exhaust valves are identical.

Pictured below is the vapouriser block, indicated by the red arrow. It channels the inlet through the hot exhaust jacket to vapourise the fuel. This is a factory modification, not a bodge. 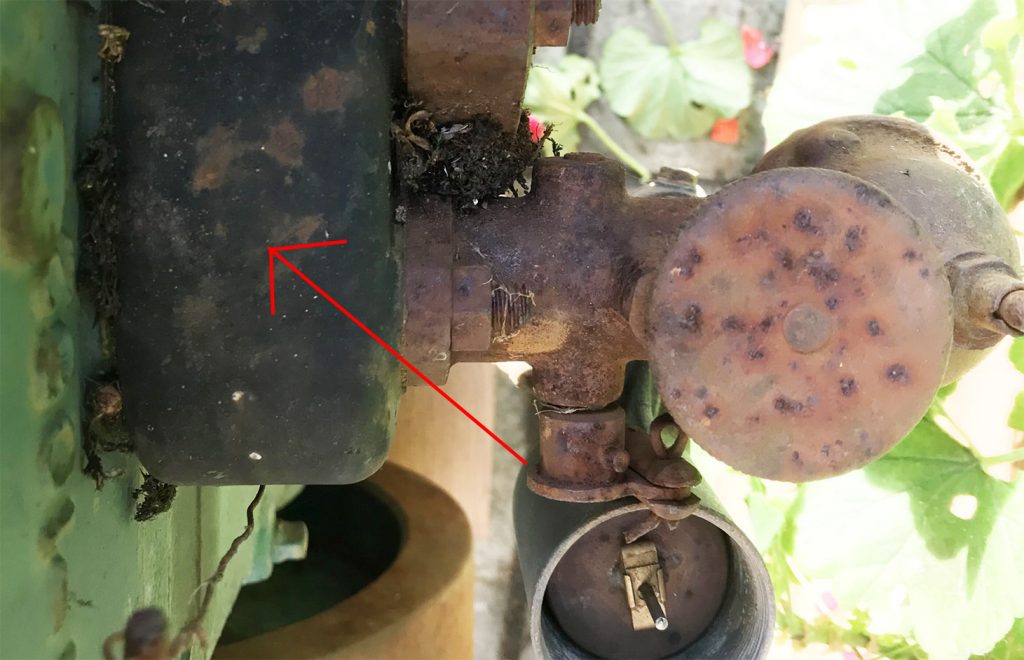 The Carburetor, shown below, will need some serious cleaning. There’s a fair amount of rust to contend with but, with some care and patience, all should be well. I’ve managed to remove the mixture control, centre photo, and free up the throttle butterfly, which was completely seized. I certainly won’t be running the engine for some time yet. My brother-in-law kindly spent a considerable amount of time removing the three air plate retaining screws on the inlet manifold, one had to be drilled out. I use the word ‘manifold’ incorrectly as it’s just one inlet pipe. I can now remove the rust from all parts and reassemble the unit. 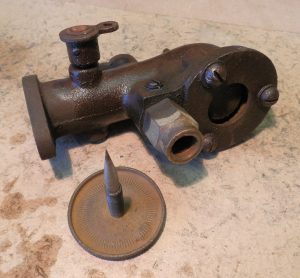 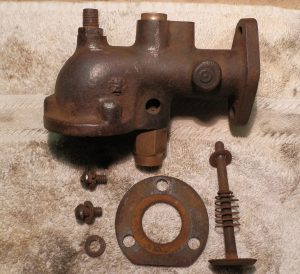 Below left is the exhaust pipe and silencer. Luckily, beneath the paint, I’ve discovered that the silencer is stainless steel. A drop of Nitromors worked wonders. The other two photos show the petrol tank. It’s rusty, both inside and out, but I don’t think there are any holes in the metal. I’ll need to use a bottle of rust removing liquid for the inside. A wire brush will be fine for the outside before painting. 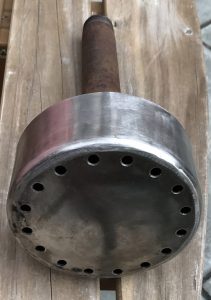 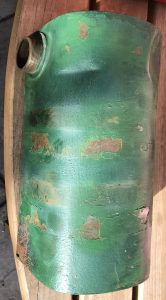 A friend has just sent me this book: The Lister D Story 1926 – 1964. Full of illustrations and well written, it’s going to be very useful during the engine restoration. I’ve already discovered a great deal from the book. However, I can find no reference to the stainless steel exhaust silencer fitted to my engine. Was it something that someone added which had nothing to do with the Lister engine? I really don’t know. I can’t find any reference to the engine’s cubic capacity, which is a shame. Perhaps someone knows?

With the help of my brother-in-law, and after a lot of heaving, the engine is now on the trolley. I can now move the engine around which will make it easier to work on. The engine isn’t yet bolted to the trolley but I don’t think it will go anywhere. You can now see the magneto and the governor linkage in the first two photos. The third shows the crankcase door removed. The next job, after bolting the engine to the trolley, will be to wash out the muck in the crankcase with paraffin and refill the engine with Golden Film SAE30 oil. The crankcase door can then be fitted, with a new gasket, and attention moved to the rusty governor linkage. 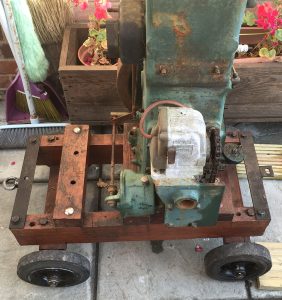 There’s still a lot of work to do on the engine but, as much as I want to see it running, half the fun is the restoration process. I’m leaving painting to last just in case I need to take the head off. I can’t see that it will be necessary but you never know. Just arrived, paints hand cleaner, rust remover. 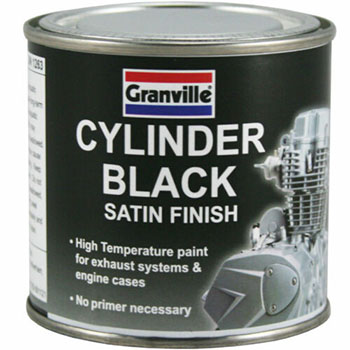 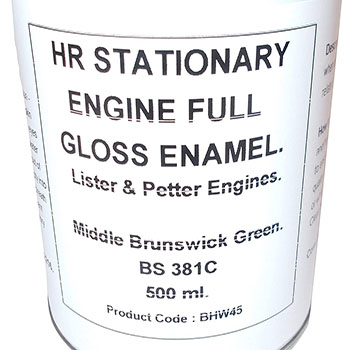 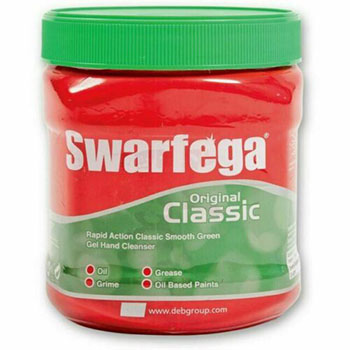 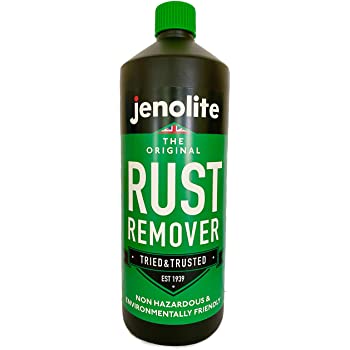 The carburetor and inlet manifold have been stripped and cleaned. Below is the first coat of Mid Brunswick Green enamel paint on the manifold. The stainless steel nuts and bolts have arrived so the engine is now mounted securely on the trolley. I only needed four but they come in packs of five. The far right photo shows what I initially thought to be the petrol on/off tap. It is a fuel tap, but it’s for draining fuel. It would appear that there is no fuel on/off tap on the engine. I’ll have to add one at some stage. I’m wondering whether the tap was to drain the float chamber of paraffin before switching to petrol and starting the engine. Once running, a three way tap would then be set to paraffin. My engine doesn’t have the small petrol container or three way tap. I think this was introduced later, so that would explain it. The previous owner said that it would run all day long on stale petrol so I’m hoping he’s right. Left hand photo, the crank case door stripped, cleaned and ready for painting. Second photo, painted mid Brunswick green. Right hand photo, the brass plates back in situ. I know they aren’t straight, but that’s how they were. I’ve just discovered that the Lister type D engine was designed to run on unleaded petrol. Leaded fuel was introduced much later, for lubrication purposes. So, lead replacement petrol (LRP) shouldn’t be used as it doesn’t burn correctly. Also, checking the specifications, it would appear that my engine didn’t have the small petrol container and three way fuel tap for starting purposes. Neither did it have the dual fuel tank for petrol and paraffin. I’ll be running it on stale petrol, as the previous owner did.