Having concentrated on HF aerials, I thought I’d better mention VHF and UHF aerials. I’ve only just started work on this page so I’ll be adding more when I can. In the meantime, take a look at my aerials. There’s the Watson W50 which covers 2 metres and 70cms. That’s the one on top of the mast. And the Diamond 10 element 70cms Yagi.  At the moment, for test purposes, it’s aimed at the Isle of Wight repeater GB3IW. 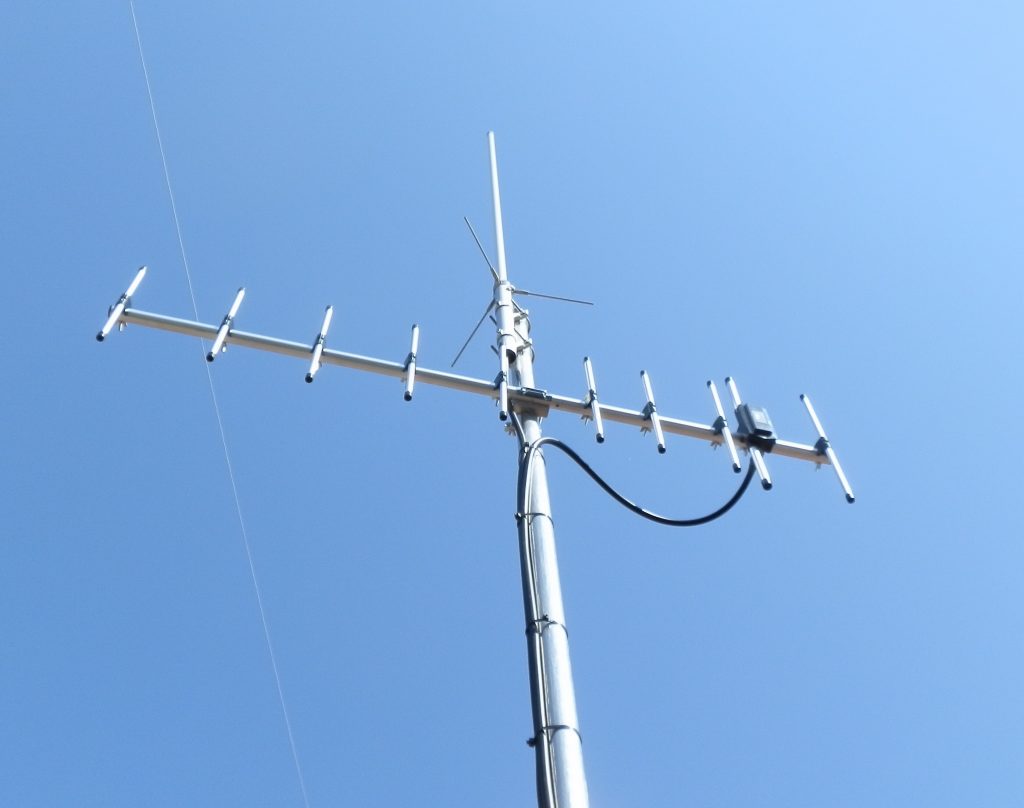 I’ve used a 2 metre four element Yagi in the past and various mag-mount mobile aerials, but I have no experience of 70cm beams. Although it’s only 10 elements, my beam is very directional. The slightest rotation, north or south of the Isle of Wight repeater bearing, and the signal drops significantly. I suppose that’s not surprising. I don’t want to spend money on a rotator because I’m more into HF than UHF. Having said that, I’d like to explore 70cms. With this in mind, I’ve mounted the aerial on a pole that I can rotate by hand.

If you’re just starting out on the higher frequency bands, something like a Watson W50 vertical aerial will do you proud. Then, if the bug bites, get yourself a tower, a big Yagi and a rotator. Oh, and a multimode radio.

Propagation on VHF and UHF is very different to HF. It’s more line-of-sight, so long distance contacts are not normally possible. There are so-called lift conditions where longer distances can be covered but, normally, distance is limited.

I’ve had the old TV aerials removed from the chimney so the Watson can be mounted high above the house. Reception is much better, obviously, and I’m now accessing repeaters that I couldn’t even hear before. In fact, GB3LR, the Newhaven 70cms repeater, is S9. I didn’t even know it existed before the aerial went up! Well worth the money spent on the aerial and the aerial man. Talking of money, don’t skimp on the coax if you’re putting a VHF UHF aerial up very high. Use RG213 low-loss coax. You’ll be sorry if you don’t. My coax is 20 metres long. Imagine the loss at UHF if I’d used cheap RG58. 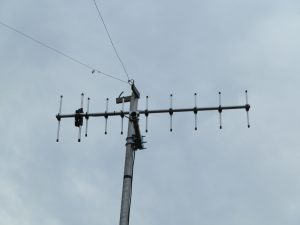 My 10 element 70cms Yagi is now on a 20 foot pole at the end of the garden. In the photo, you can see the hook arrangement on top of the pole supporting one end of my 130 foot doublet aerial. Update, the 70cms beam is now in the loft. Things keep changing here! 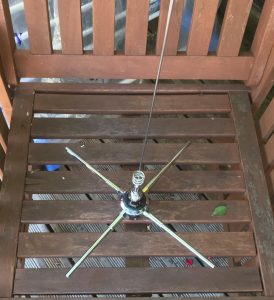 Here’s an interesting 70cms aerial. It’s made by HMP which is possibly an American company. It’s chromium plated, which looks rather nice. It also works very well. I can’t remember where it came from. It’s extremely well built so I might get it up on a pole, if there’s any room left in the garden for a pole!

Aerials can work well in the loft. Shown below on the left is my 70cms 10 element beam directed towards GB3IW on the Isle of Wight. The beam was on a pole at the end of the garden, see above. The right hand photo shows my HB9CV 2 metre beam heading west. The roof tiles attenuate signals, especially when wet, but the aerials perform very well. They are also protected from the weather, which is a bonus. 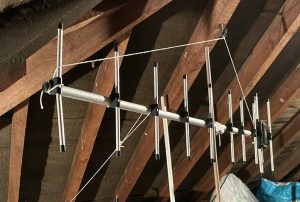 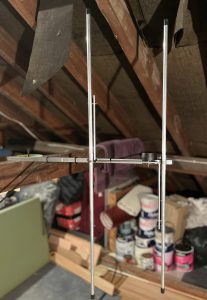 See here for information on my UHF PMR 446 aerials.